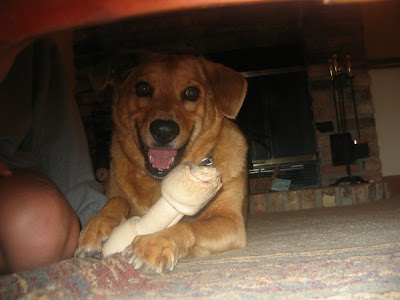 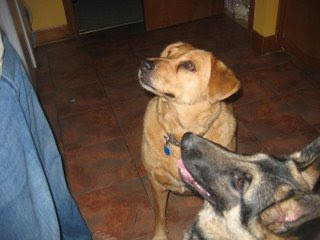 She was a lucky girl!

Zoe was more than a dog, a pet...she was a family member! We all loved her. I'm so glad I got to see her Saturday when we came over and sneak her a few bites of hamburger!
Praying for all of ya'll...
love,
Sissy

I sit here crying at work reading this. I know exactly what you are going through. God is good, he allows us to have our memories of our loved ones that have passed on. Remember Zoe in your hearts and she will never be far from you.

God bless you for sharing your story.

sniff sniff...I am so very sorry for your loss. But Becky is right. Zoe was indeed one lucky girl to have found a family that loved her so very much.

I know how devestating the pain is now.... So heartbreaking when we lose the ones we love. But try and remember all the things that made her so special and think of her now healthy and happy romping at the rainbow bridge. And yes still terrorizing those possums and snakes!

Just this side of heaven is a place called The Rainbow Bridge.
It connects heaven and earth.

When a beloved pet dies, it goes to this place.

It is a land of meadows, hills, and valleys with lush green grass.
There is always plenty of food and water and sunshine;
our friends are warm and comfortable. Those old and frail animals are young again, restored to health and vigor. Those who have been hurt or maimed are made whole and strong again.
The animals play all day with each other; they are happy and content.

There is only one thing missing. They are not with their special
person who loved them on earth; the one who had to be left behind.
So each day they run and play until the day comes when one suddenly
stops and looks up into the distance. The bright eyes are intent.
The nose twitches! The ears perk up! And this one suddenly
breaks away from the group, flying over the green grass;
his legs carrying him faster and faster.

You have been seen.

And when you and your special friend meet, you take him
in your arms and embrace. The happy kisses rain upon your face.
Your hands again caress the beloved head. You look once more
into the trusting eyes of your pet.

Thank you Kayla...you don't know me, and your blog came to me thru a random e-mail from a rescue group I belong too. But your words were needed, for our family also lost a beloved pet of 14 yrs just last week. I could not possibly write about the experience as well as you did, but you spoke directly to my heart as for the feelings our family felt. My 11 yr old was devastated, Jethro was here when she came home from the hospital...welcomed her into the family with a few sniffs and a light lick on the toes. He also watched over her as she played in the yard...our own guardian from critters of all sorts.

They are family, no matter what anyone says, pets are chosen family. We teach them, we nurture them, we do our best to keep them healthy and happy...and we love them. Till our own last breathe we remember them and tho we may get another pet, the ones who were a part of us never really leave....they are waiting to play like a pup again when we come to their new Blessed home.

So very sorry Johnson family! I've had many pets in my life and there are a few that stand out in my mind like Zoe does in yours. Time does heal but I agree, you never forget.
Love and Prayers,
Eileen

Have you ever thought that the word "DOG" is God in reverse, or one might say a reflection of God? Dogs love us like God: they never judge us, just love us as we are. I had a dog like that once, and I can honestly say that time will heal the wounds, but you never forget loved ones. This is true even of dogs. I am sorry for your loss. May the love of God wrap you in His arms of love during this time of sorrow. He knows about when a sparrow falls, and our Father knows when we hurt. He is probably crying with you. (Weep with those who weep - He wrote it!)
Shalom! I am thankful for your love for the body of Christ, and for your songs. If me, how much more does God love to hear those sweet sounds from Max, Kayla, and the rest of the gang. Families who sing together have a deep love and appreciation for each other, the extended family, and for God. May God send His Angel of mercy to your door!_Michael Montague

I want to say thank you to all of you for your kind and comforting comments. I'm so blessed to know there are so many other compassionate pet lovers out there. Time and God do heal. We are all doing better and the pain has eased somewhat. But we'll never, ever forget our wonderful friend and family member-Zoe. It has been a pleasant surprise to see so many, who didn't even know Zoe send their condolances. Thank you for your compassion and bless you. Kayla