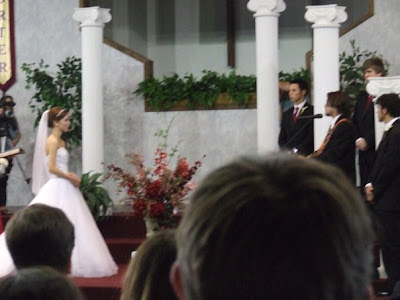 Hey Kayla,
Wanted to let you know that we were out of town and were so sorry to miss the wedding! I knew it would be beautiful. I kept you all in prayer all day. This is a wonderful report, again showing God's continued blessing in your lives. Hope the rest of the summer is calm and restful for you! Looking forward to seeing wedding pics!
Love ya,
Judith

Kayla,
You made me laugh and cry with your words of life regarding the past year of the Johnson's household. Wow, what a ride. Brought back memories of our Heather's last year under our roof and leading up to her wedding. Actually, Haley and Josh's wedding is only second to our daughter's (sorry, but I know you understand). Since we got to walk along side during certain parts of the journey, it meant a lot to hear your account of the journey. We were blessed to witness it from near rather than afar. We love you all so much and thank our faithful Savior, Lord and the Father for providing your family with an "excellent" wedding memory.
Love in Christ Jesus,
Russell

Hi Kayla,
What an awesome experience...you walked me through the ceremony as if I were there. Loved the details, bringing back those memories of the short time we had together here in CT. And Haley is the most beautiful bride, you and Keith have done an amazing job with this God-fearing young woman. What precious pictures. I'm so happy, and yes sad, to think that we are already at the time in our lives for our children to be married and start a family of their own,. How amazing and congratulations to you all!
Judy
still here in CT