Here is a word from the Lord from this morning April 30, 2006. I got the CD and transcribed it word for word. I hope you are as encouraged as I was. God bless. KHJ

Keith
Hidden. Hidden for a season but hidden for a reason, in the hands of God right now. "And though things and timing have not lined up as you have foreseen them, I am teaching you about Me," the Lord says. "Because it is about Me and not the thing and not the end. It’s about Me. It’s about knowing Me. Do not be discouraged when time lags and vision seems to dim," says the Lord. "They have not died. For you are hidden for this time to be equipped and the time will come where the release will come. The release WILL come! But wait patiently upon Me. I am doing a work within your heart. Within your heart. Don’t be discouraged. You have not been forgotten nor cast aside," says the Lord. "Draw to Me. Embrace, embrace what I am doing." 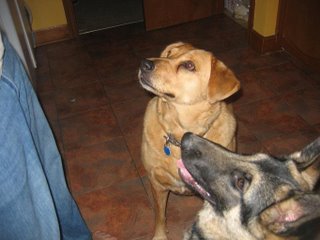 For those who read this (thanks Tonja for the encouragement!) sorry it’s been so long since I’ve posted. Between fighting for my turn on the computer with my children (and I usually lose), and a busy month, it’s been hard to sit down and type! Hint, hint, hint to Keith- I want a laptop for Mother's Day, Birthday, Christmas, Groundhog's Day, or something!

Anyway, it’s funny the great things we can learn from everyday life. I’m convinced that the Lord can use just about anything to teach us. It’s usually been through my children, but here lately it’s been through my dogs! I am the world’s biggest dog lover, I think. I’m not a cat person. Cats make me sneeze and I just don’t understand cats. (You cat lovers please don’t hate me :^). Dogs are pack animals. They usually adapt well to living with a human family because that’s how they were created. They are not independent dwellers but they thrive in a group setting. We have two dogs- Zoe, an aging golden lab mix (who is very fat-85 lbs) and Zeke, our baby. Zeke is a 65 pound 8 month old German Shepherd. Zoe was the “only dog” for 8 years. She’s the gentlest dog you’d ever meet. Children can crawl on her and pull her tail and ears and she’ll only look at us with a mournful "why me?" expression that nearly makes us cry and sends us running to the pantry for a treat(hence why she's so fat). But if you are not a human, it’s another story. She has killed snakes, rats, possums and raccoons. BIG raccoons! Bigger-than-a-cocker-spaniel-sized raccoons. Killed them dead! Violently killed them dead! When my Dad attempted to set his poodle down in our yard to meet Zoe and she lunged at the poodle with blood in her eye, we decided then and there that Zoe was meant to be an only dog! And so she has remained all of these years. That is until Hurricane Ivin hit Pensacola and my sister and her family (and dog) needed to stay with us. We were very worried about what Zoe would do to Tucker their cocker spaniel. I’m not sure what went through her canine mind about Tucker, but she decided to accept him into her “pack’. After that, I was on Keith nearly every day for another dog. (I’d probably have ten if Keith would let me!). So around Thanksgiving, he relented and we got Zeke from the North Louisiana German Shepherd Rescue (www.nlgsdrescue.petfinder.org) in Ruston. Thankfully, over time Zoe has reluctantly accepted Zeke into our pack. She wouldn’t admit it for the world, but she loves him. He on the other hand, worships the ground she walks on. Zeke has been a delight since day one. He’s very good natured and friendly. But he’s also a puppy. I’ve wanted to train him right because German Shepherds are “powerful breeds” and it’s important to get them trained early on since they like to be dominant. So I bought some books on dog training. Have any of you heard of Cesar Milan the “Dog Whisperer”? Okay, don’t laugh- although Keith did (and continues to!) Anyway, I bought his dog training book, Cesar’s Way. The book was a bit of a disappointment. It didn’t give me specific commands to teach him like I’d hoped, but it basically taught the “dog pack philosophy”. How we (American’s are the worst), treat our pets like our human babies. (Okay, I’m very guilty of this!) We train them all wrong. We need to appeal to them as dogs, not as humans. (I spent $25 on this book for it to tell me that?!) Now, I don’t agree with everything he teaches, not by a long shot. He’s a bit New Agey and definitely an evolutionist. However, I did learn some things. Through Cesar’s explanation of pack behavior I began to see God’s plan of divine order. The book taught that if you do not establish yourself as the leader, in his doggy mind your dog will establish HIMSELF as the leader. Certain behaviors, (jumping up, aggressiveness, pushiness), indicates his own perceived status in the pack. Have you ever been in a meeting where there was no clear leader or more than one person who perceived themselves as the leader? Do you remember the chaos and disorder and confusion? Even DOGS know that this isn’t right. If we won’t lead them, they will lead us. Hmmm…. Something in all of us, put there by God, cries out for order and for leadership. As much as we hate to admit it, we crave for somebody to be in charge! Even children (although they’d probably beg to differ :^), are more secure and settled when there is a firm, confident authority in their life. I’ve seen this in my own children at different seasons of our lives. They’d push the boundaries as if to check and to see if the boundaries were still there. Although their crossing the line usually resulted in their discipline, they actually seemed somewhat relieved to know that there was a line to cross. Usually when I’ve sensed disorder and chaos in my own life, I’ve had to step back and ask the Lord, “Have I gotten out from under Your ordained authority somewhere in my life”? Oh but how He delights to teach His eager children when they desire to know His way.

So how can I learn from this “dog pack doctrine”? I ask myself- As one UNDER authority, am I honoring those in authority over me by what I say and in my attitude? Am I praying for all authority as Paul instructed us to by the Holy Spirit? I recently read a prophecy on "Elijah List" about how the Lord was going to expose those with an ‘Absalom spirit’ in the church. If you remember the story, he was David’s son. He was charming and handsome, but he was also bitter, unforgiving and rebellious. He basically thought “he could do it better” than the authority over him. He charmed the people of Israel, listening to their complaints and telling them how HE would do it if HE were king. The Word says he “stole the hearts of Israel”. They were robbed. Authentic authority doesn’t need to steal anything. It is already established, set in place. JESUS is established as Head of the church and the husband as head of the wife. Parents are head of the children. Our pastors are called BY GOD and set in place BY GOD. HE does it, not man. If we have any fear of God, would we even desire to challenge His choice? And that's not even mentioning our elected officials. Like Absalom, when we rebel against authority, we are attempting to “steal” that authority by making it our own. We are basically saying, YOU shouldn’t be in that position, I should! (although we usually wouldn’t admit that). Now, having said that I realize that there are times when those in authority abuse that responsibility. I’ve been under those types of authorities before and it was very harmful. But assuming that the authorities in our lives aren't neglectful or abusive, are we abiding, even in our hearts and with our words, where the Lord has placed us?

Also as someone IN authority- am I leading by Christ’s example? His disciples argued over who would be first, who was the most important. And Christ’s response? He girded Himself with a towel and washed their feet. I heard a song recently that said something like, “His is an inside out, upside down Kingdom; First is last, last is first and the way Up is Down and the way Down is Up. To Live, You Die”. He is always our example. Having been in glorious heaven with His Father, He humbled Himself, and came to earth as a Servant, and put on His earth-suit for US! He came to suffer and to die so that we could live. That is love! THAT is leadership!

May we find our God-ordained position. The enemy would tell us that it’s a place of bondage and drudgery. He is a liar! May we flourish there joyfully, with complete trust in Him who is the one who sets us in place. And it is a delightfully fulfilling SPACIOUS place. Even the animals know that! My doggies surely do! :^)

“Lord forgive us for so often stepping out from under Your God-ordained authority and going our own way or for not leading like Christ. When we are in our proper place, in Your order, everything works so much more smoothly, we are so much safer. May we not rebel against Your way and swing wildly out of balance to our great harm but just like the planets orbit the sun, may our lives orbit Your Son. Amen.”
Posted by worshiping warriors at 1:45 PM 1 comment: