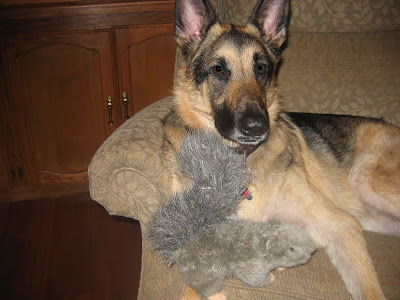 Since Zoe's sad departure from this life this past Monday, Zeke has seemed lost and lonely. Without Zoe at his side, he hasn't bothered getting up to greet us all by himself at the door when we return. He hasn't been as playful or happy. The day after Zoe's death, I was trying to think of something that would cheer him up. While shopping at Target I ventured into the pet aisle and I found my answer... I knew Zeke had to have him. He cost more than the dog toys I usually get, but this one was made by the American Kennel Club so I hoped it had to be strong (we'll find out!). This new answer to Zeke's lonely problem came home with us and Zeke was immediately smitten. We named him Nutty. Of course Nutty the squirrel in no way replaces Zeke's best friend Zoe, but it has given him and us a little joy in our lives this week... Nutty squeaks. Zeke doesn't quite know what to make of that. He squeezes Nutty's tail between his teeth and seems surprised that Nutty cries out. At first this seemed to confuse Zeke. It's hilarious because he starts whining when Nutty squeaks... Like he's worried about him yet he can't help crushing him between his teeth! Now Zeke carries Nutty everywhere. He even insisted on taking him outside with him the other day. I was worried that Nutty would end up in the yard as an unrecognizable bit of mud covered fur like his other former "friends". But when Zeke was done with his business outside, he came scratching on the back door, proudly carrying Nutty in his mouth. He brings him in the chair with him and sits with him between his paws. Yesterday he came into my room looking anxious... He looked around the room, out the back door, in my closet, whining.... It broke my heart. "Are you looking for Zoe?" I asked. He heard Zoe's name and perked up... but then... he stumbled on Nutty... Then his tail started wagging... and he was frisky and happy again. So for now, Nutty is easing some of Zeke's pain... And Zeke's hilarious 'relationship' with Nutty is easing some of ours. And today when I returned home, there was Zeke, all by himself, dancing at the door to greet me! Yay! We're making progress. Here's a photo of Zeke and his new pal- Nutty.
God bless. Kayla
Posted by worshiping warriors at 1:04 AM

Hi Kayla,
Sorry to hear about your dog. Our Zeke is getting pretty old and he has been with us since our marriage so I understand about them being like better than humans! Zeke is faithful to us all the way!
Time heals they say...I dread the day I will have to say goodbye to our faithful one.
Hang in there...so glad your Zeke now has a companion (rather odd one) but hey if it works!!
Enjoying your blog again!

I am so sorry for your loss...but I'm thankful for the creative wisdom that the Lord has given you to bring comfort and a smile to your family, esp. to Zeke!

Sounds a little squirrely to me, but I have been called nuts before. You have to laugh at how pets make us humans feel... every emotion you can imagine can come out of these special relationships. amazing.
Bro Russell