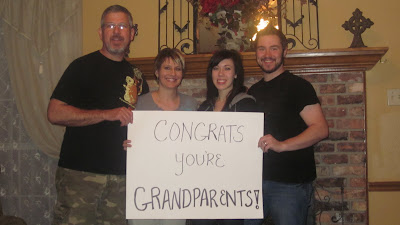 Well I've been keeping a secret for the last few months. It's been extremely difficult to keep. I am not that good at keeping juicy secrets but by God's mercy I somehow managed to not explode. So for those of you who asked for the details and for those of you who have no clue what I'm talking about, here is the story of how it all went down in more detail than you probably care for...(sorry, I'm a fine-liner and not a headliner. Just how I roll... ;)

In February we spent a wonderful week with our kids in Missouri. I had been asked to lead worship at the women's meeting at Faith Chapel and we were all too happy to make the long trip there. We made a mini-vacation out of it and spent a wonderful week just kicking back, visiting with Haley, Josh and Max and attending every single thing Faith Chapel had to offer that week. It just further confirmed to us that this is where we belong. The reluctant trip back to Baton Rouge was made a bit more exciting when Keith nearly gave some stoned dude a heart attack by pulling his .45 out on him at a gas station when he opened my door and tried to get in our truck. (Yep I'm married to Rambo).

Anyhow, we reluctantly settled back into our routine in Baton Rouge. The following weekend Keith and the twins made a quick turkey hunt to St Francisville. That Sunday evening they returned tired so we decided to make an early night of it (which we hardly ever do). We were in our jammys and settled in bed about to go to sleep, with the laptop watching Faith Chapel's morning service online when both of the dogs started barking. Zeke our German Shepherd barks at everything but Lucca our Akita doesn't bark unless someone is in our yard. So when she barks, we pay attention. Keith headed down the hall muttering something like "who in their right mind would be at our front door at 10 at night". I stayed in the bedroom because I was in my jammys and didn't particularly want to greet guests in such attire. When I heard the door open and then muffled yelling... I started to get concerned. Although we live in a relatively safe neighborhood, this is Baton Rouge after all. Then Keith yelled, 'Honey you have to come see this!'...and I honestly couldn't imagine what on earth I was being summoned, in my jammys, to see. I cracked open the door, cautiously peeking out and there in my front yard stood my daughter and son-in-law (and his sister Joanna with a video camera) laughing and smiling... What?! I mean, Keith and I had just been in bed watching Josh lead worship at Faith Chapel that morning and my sleepy brain couldn't wrap around the fact that he was on my computer and in my front yard at the same time. Then as I tried to digest this I noticed something else-- in their hands they held a sign that said- "Congrats You Are Grandparents". What?! Yes, our precious kids left St. Louis after church that morning and drove 10 hours just to come tell us, face to face that Haley was pregnant. They had found out she was pregnant the night we left their house. We absolutely couldn't believe it. Josh's parents got the same exciting surprise and about half an hour later they joined us for a celebration (and a cake Josh's sister Joanna made and brought- yes they thought of everything! :) We were each given a teeny baby sock with two scriptures on them that they are praying over their baby. We spent a joyous Monday with them and Tuesday morning they turned around and headed back to Missouri. What an unexpected and joyous visit that was! The only bad thing was.... we had to WAIT to tell this wondrous news ! They asked us to wait until she was around 8 weeks and after they told their church. So we waited................. a month! It wasn't easy folks.

So if you've seen me this last month and I seemed to be avoiding you... Now you know why. The excitement and joy have been about to burst out of my pores. But somehow... I managed :)