If the answer was Yes. 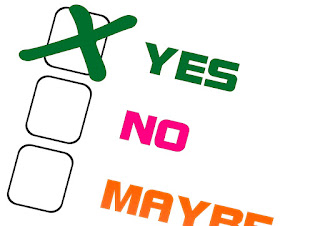 One thing I’ve realized that I do with this blog is I wait until I feel I’ve kind of worked through something and have what I consider insight into it before I share it with the world. Hence why my posts are few and far between. But I have many thoughts in the meantime- some thought provoking, some not so much- that I feel I’ve not processed it enough to merit a blog post. But this morning as I was praying, I felt that (not going to say “God spoke to me!” because it wasn’t that obvious, but…), I felt that I may need to share anyway. That maybe some of my in-the-process thoughts might be worth reading as I am working them out in my head and heart. It may cause someone to start working out some similar thoughts themselves in a way and with a conclusion that is unique to them. Also I’ve decided that I don’t have to write a novel for it to be worthy of a post. :) So with that in mind I hope to post more regularly. I hope. That remains to be seen…

So here’s one thing twirling through my head of late. I heard a message someone posted on Facebook where a minister asked this question- ‘If we knew the answer was going to be ‘yes’, how would we then pray?’ Then he followed it up with this scripture: “For all the promises of God in Him are Yes, and in Him Amen, to the glory of God through us.” 2 Corinthians 1:20.

So this got me thinking how God is my heavenly Father. I am His kid so to speak. So as   Mom with my own children- or maybe to put it where I am in life now- with my grandsons, if one of them said, “Mimi? Would you help me with this?” Goodness, I’d be so eager, that I’d be knocking over furniture to get to them quicker. So is this how God is with me when I ask Him something that is obviously His will? Or if I ask something that is already declared as a promise in His word? I think the answer to this would obviously be Yes. (I realize He doesn't always say 'yes' when we pray for various reasons beyond our limited understanding but for the purposes of this post understand that I'm referring to those things which we KNOW are His will.) The things He has promised and that are His will are things that He obviously wants to do. It’s not like I have to twist His arm. To be honest, a lot of times I think my prayers have been more like vent sessions than intercession. Or I’ve viewed my prayers kind of like writing the President a letter that he probably won’t read but maybe I’ll get lucky. Now there have been many anointed moments where I knew I was breaking through and making a connection in prayer but it seems that should happen more often than it does. Now that I’ve been turning this recent thought over in my head I feel it has given a boost to my faith. There’s this scripture along the same vein that encourages my faith when I pray:

1 John 5: 14 “This is the confidence we have in approaching God: that if we ask anything according to His will, He hears us. 15 And if we know that He hears us—whatever we ask—we know that we have what we asked of Him.”

So if I’m asking for wisdom, direction, peace, to not be afraid, to be able to love or to forgive, then I think I can be pretty confident that God’s answer will be YES. The pressure isn’t on me to ask a certain way or to pray harder or more often. Really my only responsibility is just to ask and believe. And like my children and grandchildren would hopefully do, I can feel confident that of course my Father’s answer to these requests will be- yes.

For example, yesterday I had a doctor’s appointment and for some reason I was feeling anxious about it and some other things. Instead of just accepting that feeling and going on as I was, I prayed about it on my way there. And I thought about God’s promises concerning what I was feeling. One was- God has not given us a spirit of fear. But He’s given us a Spirit of power, love and a sound mind. So it’s not God’s will that I be anxious. So I asked Him to help me not be anxious with the thought in mind that I was praying according to His will and of course the answer would be yes, And guess what- He answered and I wasn’t. Yay! :D

So anyhow, I haven’t got as good a handle on this as I’d like but since I started thinking this way I have been praying with a lot more confidence and faith than I was. Now God is so good and He’s answered so many of my prayers in the past despite my puny faith. But I feel like I have a new way of thinking of prayer and of thinking of my heavenly Dad. It really makes me love Him more and want to talk to Him about stuff.

Nothing profound and it’s not totally processed but I’m working on it.  I hope that despite it not being fully formed that it’s something that blesses you, helps you in your prayer life and your relationship with your heavenly Father. So anyhow… that’s all I got. Bless y’all! :D
Posted by worshiping warriors at 5:04 PM No comments: