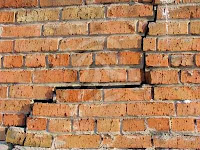 I was looking back through this blog at some very old posts and I found this one that I had forgotten I had written. It really jumped out at me as something I needed to share again. So I am resposting it in part. Here it is... :)

God is purifying me! And wow am I seeing lots of dross! Too much it seems sometimes. At times I want to say, “Stop! That’s enough! Don’t show me anything else!” But thankfully, HE knows when to stop! Praise Him for that!  I’ve definitely seen some walls coming down in my life. Okay, maybe not all of the way down… I’m not sure the state of the walls… but I DO know that some mighty big cracks are showing. You’d think that would make for an exciting, joy-filled time, wouldn’t you? Ha! As walls come down, they EXPOSE what’s behind them! When Jericho’s walls came down, the Israelites didn’t just throw a party because the walls were down and then that was it. They had to go in and continue the conquest of Jericho. They had to put to death the inhabitants of the city. The Lord showed me this but I wondered how to fight, and Pastor shared the answer the next Sunday- We don’t battle with natural weapons, we put those things to death through the cross--through dying.  The walls ARE coming down (hallelujah), but I’m seeing ugly things behind those walls. Things in me that need to die! And they’re not dying easily… Some of them are fighting to live on! But I am determined! I will not go round this mountain again. I will not jump off this altar again. Jumping off may give me a temporary reprieve, but rest assured- I'll be back at this same place one day again if I do not remain and let God finish what He's begun.

I believe there is an anointing, RIGHT NOW, for breakthrough- to deal with deep-seated strongholds we’ve dealt with for years. Strongholds we’ve become so familiar and comfortable with that we’ve ceased to even fight them. Yes, we hate them, but it’s easier to live with them in the land than to fight them and put them to death. I’m reminded of so many of Israel’s kings who may have been good and who destroyed the idols of the land, but who left the high places… or left some of the inhabitants in the land and didn’t deal with them. And those inhabitants are still a thorn in Israel’s side to this day. The descendants of the children of Israel are today, battling those same enemies who were not dealt with back then. If I continue to leave the high places in my heart and life, if I continue to leave certain strongholds and open doors to the enemy- am I not hurting more than just myself? Am I also leaving that door open to my children? My grandchildren? My great-grandchildren? This go-'round, I feel a determination in my heart that I’ve never felt before when I’ve faced familiar strongholds once again- This time I will not stop fighting and dying until the walls are down and Jericho is conquered. This is the last time I will face this. Because I am going to not only face it, but conquer it in Jesus name! If I won’t do it for me, then I’ll do it for my children; for my generations. As I said before- there is an anointing for breakthrough right now! And it’s not just for me. It’s for everyone. Perazim- breakthrough! Yet we have a choice. Will we respond to Him in this season? Or will we jump and run before He’s done? Lord, help us to remain in the flame! (That sounds like a song! :^).  So if I've seemed not myself lately, just know, I am in the fire. It hurts and it isn’t fun. But I have hope in my heart that after the breakthrough, there will be more of Him! What more could I ask!? HE’s gonna be worth it all!

"Purify our hearts
Cleanse us from our sin
Open up the doors
And let the King of Glory in"
Posted by worshiping warriors at 9:31 AM

Kayla, I have never read your blog before, but what a blessing it is to my heart and life today. My spirit agrees with your spirit in your desire to lay it all on the altar of sacrifice to Him. This is truly where the joy of life is found...learning to die to your own desires and being willing to yield to Him. I too strugle with these same walls that you speak of. Satan is very crafty and seems to know when he has a found a crack in our armor. Praise God that He controls Satan and is just waiting for us to call on Him to intercede for us and strengthen us with His inpenetrable power! It is so exciting to know there are young adults like you who love Him so much! God bless your family and your new grandson, Gabe!!!

What a powerful post. I'm encouraged to keep pressing in for Christ to be formed in me. Thanks for sharing! Sade