Happy Birthday to our Double Blessing! 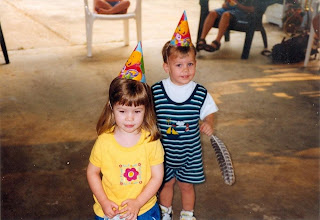 It was October of 1994 and the last day of our beautiful adventure in Scotland. Three years before it had been a dream come true for me when Keith had received orders from the US Navy to Edzell, Scotland. Those years had been some of the most fruitful and memorable of my life and I did not want to leave. But despite our familiarity with the transient lifestyle of military folk, this particular tour had passed all too quickly for me. Our new orders would send us halfway around the world to Pearl Harbor, Hawaii. The plan was for me, Haley and Max (ages 4 and 7) to fly out of Glasgow the next morning headed to Louisiana to visit family, followed by Keith a month later. We wanted a good long visit with family because we knew we’d probably not see them for another 3 years. After a day filled with packing and tearful goodbyes I don’t know what made me think to do it. I had no symptoms or signs but for some reason that night I decided to take a home pregnancy test. I really didn’t expect it to be positive, but being the ever-prepared one, I figured that on the slight chance it might be, that it would be a good thing to know before leaving Keith for a month. And as you can guess, the test was positive and we were surprised and very pleased.

Well as it turned out it was a good thing I took that long flight a month earlier than Keith because about two weeks into my visit I became unrelentingly, violently sick. Had I waited a month and flown home with Keith, well you can imagine what a nightmare that would have been. God mercifully spared me and the airline. Once he arrived, Keith spent the bulk of his leave tending to me, half out of my mind with misery. We endured multiple ER trips and my frightening allergic reaction to the nausea meds. But during this chaotic time we managed somehow to make it to a car dealership and bought a gnarly Pacific-blue van that I wasn't convinced we should buy. However I was too sick to argue so Keith prevailed. And then, some time before the end of our leave, I emerged from my misery- a bony, pale shell of my former self. But thankfully alive and still pregnant.

Somehow we made it through the flight to Hawaii without incident and settled into a hotel suite awaiting an opening in base housing. In order to get a four bedroom house we had to prove to the Navy housing office that I was indeed pregnant .Were they blind? But we went to the doctor to get the official diagnosis. And we got it all right... and so much more! Later as I was prepped for my first ultrasound, the ultrasound tech asked me if I wanted to know the sex of the baby. I jokingly remarked, “I just want to know its not twins”. The tech began the exam and pointed out the head, the heart, the tummy, then she stopped……… and said, “Ummm excuse me I’ll be right back” and promptly left the room. Keith and I were silent, afraid to even venture a guess at what she could have seen that would elicit such a reaction. Soon she returned with a doctor. She mumbled something about a mirror image, then just pointed at the screen and looked anxiously at him. The doctor smiled broadly and said, “No, that’s no two headed baby, you’re having twins!” Then he nonchalantly sauntered away leaving us in stunned silence. Um...come again? But there in the midst of our suspended disbelief, a holy awe settled over me and Keith as this thought came to my mind, “Wow, we are so BLESSED! He gave us TWO!” But ever practical, I think the first words out of my mouth actually were, “It’s a good thing we bought that van”.

Well a double pregnancy certainly explained my mega morning-sickness. But as reality began to set in, so did the panic. I wrote about my fear in my "The Grace Ticket" post.

Other women had twins- calm, capable, confident women. Not me. Definitely not me.… "Twins God? Me God? Are You serious?" But the fact remained that for some odd reason God DID choose me to be the mother of twins and it has forever convinced me that He definitely has a sense of humor. :) That night as I lay in bed, a thousand different scenarios of taking care of two babies at once were played out in my head.

What if they both were crying at the same time. What if they both needed their diaper changed at the same time. How would I choose? What if we were in public and they both needed me. How would I carry them both? Could I take care of two babies by myself while Keith was at work? And what about my other two children? Would they feel neglected? And when would I ever find the time to homeschool? Would I ever be able to go to the grocery store again?

These kind of thoughts made sleep impossible and worked me into a panic. But as I frantically questioned God about this…. as sure as I’ve ever known, the Lord spoke to my heart at that moment and He said (basically), “Kayla, my grace is sufficient for you. Right now you are picturing and worrying about things in the future that you aren’t facing now. You are pregnant now. You need my grace for that, not for handling two babies at once. When you have your two babies, that particular grace will be yours as well. But you won’t have it until the exact moment you need it. So quit worrying and looking ahead and deal with today. Relax and trust in me. My grace IS sufficient”.

I cannot tell you the peace and relief that flooded my soul at that moment. I breathed a prayer of gratitude and turned over and fell fast asleep. And from that moment forward a confidence and excitement stirred in my soul.

Well, we soon moved into our four bedroom Navy house and I was promptly enrolled in the hospital’s ‘twin clinic’ for close monitoring of my pregnancy. And true to form, the pregnancy was a wild ride of multiple appointments, preterm labor, gestational diabetes, bed rest, hospital stays and a dangerous overdose by an inattentive nurse (which got her fired by the way). I spent the entire last month of my pregnancy at Tripler Army Medical Center, the largest military hospital in the Asian and Pacific rim, located on the slopes of the Moanalua Ridge. I suppose if one has to be stuck in a hospital for a month, it might as well be on a lush mountain slope overlooking Honolulu. Needless to say, I got to know a lot of people there during my extended stay and was able to share my faith with some of them. We had some close calls but I can attest to the fact that the Lord was so near during that time, keeping us in His peace. His grace really was sufficient during what would have normally been a fear-filled season.


When we discovered we were having a boy and a girl, our joy knew no bounds. It was like from the beginning the Lord let us know that He was enjoying this, He was stretching us but He had a good plan, He wanted these babies to be born and He’d chosen us to raise them. During my pregnancy, I began to get a foretaste of their personalities. From my many ultrasounds I was told that Twin A, a very active little girl, who was positioned right in front, would be born first. Twin B, our little boy, tucked quietly in my side, would be born second. Through all of the close calls with delivering too early I asked the Lord to please let them be born by 36 weeks. And on May 17, 1995, the very day of my 36th week, our double blessings dramatically entered our lives. Hannah Ruth weighing in at 7+ lbs and Joseph Ian at almost 6 lbs. And there’s not been a dull moment since!


Despite the extra work of two babies (two of everything- think diapers, strollers, car seats, clothes, toys, etc) I can honestly say that they have truly been a double blessing.

As they were in my womb, Hannah has proven to be energetic, active, sassy, competitive, emotional, warm and extremely funny. Joseph has proven to be quieter, deep, creative, thoughtful, artistic, intense and also warm and extremely funny. I’ve never seen two twins who were more opposite. But thankfully they were each other’s best friends while growing up. And as with many twins they had their own language. They had many a conversation with each other that only they understood.

And from that blessed day in May when they entered our lives I want to say that they have blessed me and their daddy from day one. Hannah, called to be an intercessor and a worshipper. Joseph, called to prosper and to prophesy. God created these two beautiful, interesting, priceless treasures and for some reason He chose me to carry them together in my womb and he gave me and Keith the honor of raising them. Their heritage has been paved with righteousness and their destiny is greatness in the Kingdom. And I for one can’t wait to sit back and watch it unfold. So Happy Birthday to our double blessing. We love you Hannah and Joseph!!! Its definitely been double the fun!

Here's some photos of our twins down through the years. 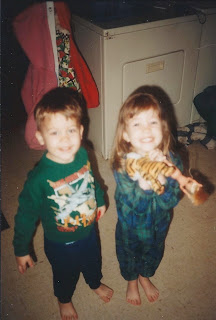 Posted by worshiping warriors at 12:23 AM

Happy Birthday!!! I remember the difficult time you had submitting to the Lord to have another child, and then He not only blessed your submission to Him, but He did it so mightily, with two precious gifts. He knew Hannah and Joseph could only be the children that He needed them to be in His Kingdom, if He entrusted them to you and Keith. It's soooo amazing to see just how grown up they've become, and just plain not fair that you and Keith NEVER age!! What's with that??? :-)