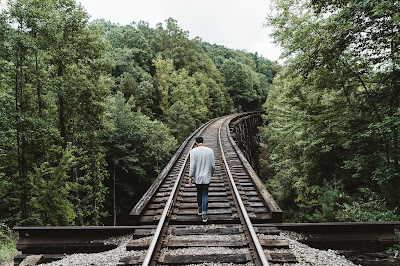 Well hallelujah our kiddos have arrived from Missouri. We will have a house full for Christmas and it’s going to be fun. Its always sort of bittersweet to have them here because I know that it isn't going to last and they are going to leave soon, but I’m choosing to enjoy the now and to not think of tomorrow. And we are truly thankful for our 'now' because there just seems to be so much tragedy going on in the world right now. Not just in the news but with people we know. It always puts whatever I’m struggling with in perspective and makes me thankful for those precious ones in my life.

Have you ever looked at a tragic situation and thought, “I don’t know how they are dealing with this. I just couldn’t do it. I just could not handle this if it happened to me.”? A friend and I were having such a conversation recently and we were basically saying these very things. And I was reminded of a story I read years ago told in THE HIDING PLACE by Corrie ten Boom. One night when she was a little girl, as her sweet Daddy was tucking her into bed, she became overwhelmed with the fearful thought of what if he were to die.

(As told in THE HIDING PLACE). “I burst into tears, “I need you!” I sobbed. “You can't die! You can't!” “Corrie,” he began gently. “When you and I go to Amsterdam, when do I give you your ticket?” “Why, just before we get on the train.” “Exactly. And our wise Father in heaven knows when we're going to need things, too. Don't run out ahead of him, Corrie. When the time comes that some of us will have to die, you will look into your heart and find the strength you need – just in time.”

Years later during World War II this came to Corrie's mind as her entire family was rounded up and sent to a concentration camp for hiding Jews in Nazi-occupied Holland. And even through their suffering and the death of her father and sister, God’s strength was there when she needed it and she was not overcome by her circumstances. She did ‘handle it’ when it needed to be handled, but only by the grace of God.

I read THE HIDING PLACE when I was a little girl and as a fear-prone child, this story particularly comforted and ministered to me. I have never, ever forgotten the lesson of this story and it has been proven true to me over and over again and I've seen it proven in the lives of others.

In December 1994, the Navy moved us to Hawaii. Christmas found us living in a hotel suite with two small children and me in the middle of a difficult pregnancy. I loved my own children with all of my heart but I’d never been one of those women whose heart melted at the sight of a baby or who as a girl had gladly volunteered my babysitting services nor as a mother had I ever been overly confident in my child rearing abilities. So every pregnancy, although greeted with great joy was also greeted with a fair amount of trepidation at the great responsibility entrusted to us. I never felt worthy or capable of such a sacred task. And I was especially anxious to have my third baby so far away from my support base of family, friends and church. I just didn’t have a whole lot of faith in myself to efficiently run a household while capably handling three small children and homeschooling my eldest all day long while Keith was at work. The very thought of it greatly overwhelmed me. Yet despite these worries, we had a wonderful Christmas together as a family of four in our hotel room.

Then sometime after Christmas, I went for my ultrasound.

I should have known something was up when the ultrasound tech took one look at my ultrasound and announced, “excuse me I have to get a second opinion” then promptly left the room. But I can honestly say, this didn’t alarm me at all. For once, my overactive, worse-case-scenario thought-process didn’t kick into high gear. I don’t remember thinking anything at all as a matter of fact. Keith wisely kept any concerns he may have had to himself because he knew better. So when Mr. Second Opinion casually commented, “Yep, there’s two babies in there. You’re having twins Mrs. Johnson.” I nearly fell off the examining table. This was impossible. This was inconceivable. Other women had twins- calm, capable, confident women. Not me. Definitely not me. However for a brief holy moment, a sense of awe came over me as if God had especially blessed us with this ‘double portion’. However just as quickly the awe left and panic set in.. "Twins God? Me God? Are You serious?" But the fact remained that for some odd reason God DID choose me to be the mother of twins and it has forever convinced me that He definitely has a sense of humor. :)

That night as I lay in bed, a thousand different scenarios of taking care of two babies at once were played out in my head.
What if they both were crying at the same time. What if they both needed their diaper changed at the same time. How would I choose? What if we were in public and they both needed me. How would I carry them both? Could I take care of two babies by myself while Keith was at work? And what about my other two children? Would they feel neglected? And when would I ever find the time to homeschool? Would I ever be able to go to the grocery store again?
These kind of thoughts made sleep impossible and worked me into a panic. But as I frantically questioned God about this, he reminded me of the train ticket story. And as sure as I’ve ever known, the Lord spoke to my heart at that moment and He said (basically),

“Kayla, my grace is sufficient for you. Right now you are picturing and worrying about things in the future that you aren’t facing now. You are pregnant now. You need my grace for that, not for handling two babies at once. When you have your two babies, that particular grace will be yours as well. But you won’t have it until the exact moment you need it. So quit worrying and looking ahead and deal with today. Relax and trust in me. My grace IS sufficient”.

I cannot tell you the peace and relief that flooded my soul at that moment. I breathed a prayer of gratitude and turned over and fell fast asleep. And from that moment forward a confidence and excitement stirred in my soul. I was even more overjoyed when I found out I was having a boy AND a girl. Although my pregnancy was difficult and I almost delivered early several times, I had an abiding peace because I KNEW no matter what we faced, that ticket would be there when needed. And after they were born, although yes it was often difficult having two babies at once, I think I was more relaxed with the twins as babies than I was with my older two. They truly were and continue to be a double blessing and have been a genuine delight to their dad and I.

God was true to His word and His grace was there when I needed it.

Since that time when God’s ‘grace ticket’ was there for me, I have observed it handed out countless times, at the moment of much more serious needs. I watched our friend George Waites, who while battling pancreatic cancer faced his mortality with God’s peace and a sense of humor. I watched his wife and children walk through that valley with strength and an eternal perspective while proclaiming the goodness of God in the midst of loss and grief. I’ve seen my sister and brother-in-law’s faith and perseverance as they’ve never stopped pursuing God in the midst of dealing with the difficulties and delights of raising their autistic son. And right now I’m watching my friends Jen and Sean face Sean’s terminal cancer and the heartbreaking prognosis that he may not be here by Christmas Day to spend it with their two young sons. And I’m seeing them face this trauma with a gratitude for each precious day together and with a strength that defies explanation.

God’s train ticket of grace is there when we need it to face something that we could never imagine facing before. And like the manna, it is for each day-one day at a time. It doesn’t make things easy and it doesn’t take away the pain, but somehow it is sufficient to bear what would otherwise crush those who have made the Lord their hope. But don’t expect to understand today what you may or may not face tomorrow.Each day has enough trouble of its own. If we’re ever called upon to face something unimaginable, rest assured that grace ticket will be handed to us by our loving Father at the very moment we get on the train, but not a moment before.

2 Cor 12: 9 But he said to me, “My grace is sufficient for you, for my power is made perfect in weakness.” Therefore I will boast all the more gladly about my weaknesses, so that Christ’s power may rest on me. 10 That is why, for Christ’s sake, I delight in weaknesses, in insults, in hardships, in persecutions, in difficulties. For when I am weak, then I am strong.”

And please say an extra prayer for our friends Sean and Jen Coffey. Please pray for a miracle and that if it’s God’s will Sean will be here to spend Christmas Day with his beautiful wife and two little boys. But that whatever the Lord chooses, that His‘grace ticket’ would be there exactly when they need it for whatever they will be called upon to face, as promised.

I pray that you each have a very, very Merry Christmas.
God bless you all.
Posted by worshiping warriors at 9:34 PM

Another great read! You really should write a book.